The Oneplus X cellphone review: It's $250, is the low price worthoverlooking the glaring flaws? 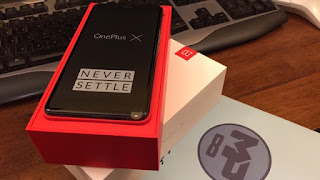 I just got my OnePlus X cellphone in the mail, I had an interest and honestly I can easily sell it for what I paid for it if I really don't like it in the next 20 days, so no big loss.

First the box and packaging are apple level presentation.   It's awesome, they even include a thin rubber case for it in the box.   It feels great, it looks great, and that is where it is at it's best.   Once you turn it on, things go sideways.    First you have to wait out the failure of connections on first start so you can skip them.  OnePlus shipped it with a gigantic flaw in the operating system and the update will fix that problem, but you cant update it until you get past the flaw.  so skip setting up the wifi and do everything on your cellular data for setup.

The phone has hardware buttons.... except they are not lighted so they look invisible in all but direct sunlight.  if they would have silk screened them in a bright white this would not be an issue...  Glaring design flaw #1.

The phone is amazingly thin and light,  but is losing an additional 1mm of thickness worth it at the expense of battery life?   I am starting to think no.   After a week of living with this phone as my daily at the end of the day I am at 25% battery on the OnePlus X while my iphone 6S is still at 75%   I actually would like the phone to be 2mm thicker and give me great battery life.  Yes batter is more important than style to me.   Some others may feel differently.

Audio is great,  the phone will get crazy loud, almost as loud as an HTC ONE,   the OS is fantastic, but the huge flaw of not supporting all LTE bands are starting to show.   I am in 3G more more than anything else because OnePlus did the really stupid move of excluding the 700mhz LTE band that is in use for most of the united states.  So for most USA users your One Plus will NOT get LTE speeds but will be a 3G phone for most of the time you are using it, unless you are lucky to live in an area that AT&T has not upgraded yet.  But the clock is ticking  the 700mhz LTE band will be the standard in the next 2 years and the OnePlus X will end up as a unuseable phone for the US market for people that want high speed data. Lastly it's sensitivity to receive signals is not really good. In a building that I get 1 bar of signal on AT&T. The one X reports no service.  I am betting they did not hire an antenna designer and are using the reference design from the cellular radio chip manufacturer.

Do I recommend anyone buying the phone?    Are you a tinkering type?  love the idea of a completely unlocked phone? And will gladly live with the flaws?  then get the OnePlus X.   It's fast, it's nice, it is unlocked and a lot of people are already working on leveraging the possibilities the phone offers.  but for a general user you need to stay very far away from this phone.  the bugs will get you, the flaws will annoy you, the battery life is just not there, and finally lack of 700mhz LTE means you are stuck using low speed 3G or relying on open wifi.

If you have an invite for this phone and you are not a developer or high end tinkering type,  pass your invite along to someone who is.
Email Post