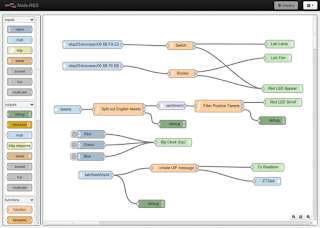 I have been trying EVERY single Home automation system out there.  I have tried the commercial, consumer and open sources ones.   Commercial hands down Crestron destroys the rest.   Savant,C4,AMX are so far behind Crestron it's ridiculous.  But the price point is where not a lot of people can afford it because it really is the Lamborghini / Bugatti of the Control world.     I have tried ALL The consumer "cloud" systems and have a closet full of their special stuff.   Smartthings, Wink,  and the rest all are easy to set up but falls on their face hard when there are service outages which happen a lot or if you have internet hiccups,  suddenly your whole house fails to function in any way except for extremely basic ways.    I then tried several of the open sources ones.   OpenHab and the others are so horribly convoluted and utter messes that even experienced HA and Linux people can not even get a system that works well, plus all their documentation is so out of date and scattered getting started is a nightmare.

Node Red is extremely easy to install on a cheap Raspberry pi, it even works well on the Pi zero and older Pi 2 models.   and adding functions is as easy as typing a single command in a text window.

Other Open Source HA systems I spent weeks trying to get functioning only to give up in frustration because trying to do a very very simple thing requires hours of hand coding in a wierd esoteric language that someone created to stroke their egos.   Node Red uses Javascript and some simple library calls, nothing special,  nothing that needs you to learn something new.   I had it controlling some WIFI bulbs within minutes and within a day found I can control ZigBee light bulbs and talk to 433mhz cheap sensors reliably.  The limitations to Node Red are wide open,  if you can find a linux utility to talk to a device, you can wrap it in node red and add it to your Home automation.   Nest thermostat,  Talking to Alexia,  Honeywell thermostat, garage door openers,  Belkin Wemo devices, etc..   It's all either already done or easy to add in.

How am I using Node Red?   I'm using it as a glue layer to my home automation.   I have Crestron at my home now as I got so frustrated with reliability of other brands.  But I needed to glue some other devices into my Crestron system.  Yes I could have written the modules in the Crestron directly by using C#  but I am not a good C# programmer and honestly it takes a LOT longer than doing it in Node Red.  I simply open TCP sockets to and from Crestron, and use node red to translate for me.  I have real crestron motions sensors in the house but I use cheap-o pet immune 433mhz motion sensors outside where I don't care if I have to replace them every 6 months as they are $8.00 each.  This lets me do lighting automation such as the outside landscape and house lights are at 25% normally but if I walk over to the side of the house it detects the motion and brings them up to 100% brightness so I can see better to pick up the dog's toys in the yard when it's dark at 6pm in the winter.   I also use it for the patio lights as well as notifications. It also lets me add in Door Sensors that are wireless so light actions happen instantly instead of with a short delay like motion sensors have.  Plus Crestron does not have a wireless battery operated Door contact sensor...   and adding one to the mailbox also gives us a "we got mail" indication on the touch-panels as well as text notifications, etc...

As to the reliability, I have the raspberry pi on the same UPS that the crestron gear is on, in the last 3 months I have had 100% uptime compared to the SmartThings system I just removed completely last night that had a 80% reliability.

Update:  Still running extremely strong.   Node Red hands down is the best home automation the Open source community has ever designed.    I am using it with Crestron and currently have 433 china door sensors,  Zigbee bulbs, Wifi China switches,  And crestron all talking together to make an automation system that simply just works.    It uses Life360 to detect location for automation rules and pushbullet to send me notifications of doors and other events.    Luckily a lot of node red modules are expanding at a rapid rate,  weather decisions, IFTTT, heck I even have it pulling in data from a cheap walmart weather station into the system.   It really is the "glue" that I use in my hodge podge system.