The Intel Compute Stick... The little PC that Wasn't. 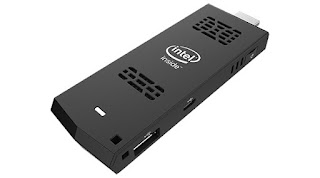 Back a couple of years ago Intel rocked the world with their Compute stick.  And at it's near $200 price point I wanted one but it was not close enough to my "impulse buy" number to ever get one.

Fast forward to 2017, you can now get these things surplus for $30 on ebay, so I snagged a couple.  It seems not a lot of people bought them and after messing with one for a couple of days, I see why.   At first look they seem to be capable as hell,  quad core, wifi and bluetooth, HDMI 1.2 all ready to go and runs off of 7 watts that most TV sets can put out.   I snagged a couple for a very light duty idea.  These will be AWESOME for digital signage devices.   And with a tiny bit of configuration I had MPLAYER playing a loop of videos in a playlist full screen on boot.  This is awesome!    So I let it run....   20 minutes later screen froze.   Hmm, odd.  reboot and now it will not reboot, so I use the restore partition and restore it.

Repeat all the above and it freezes again.  So I decided to start researching and discovered deep on the internet bowels a few postings on some obscure website forums that others were experiencing this as well.   It seems that Intel on their cool technology demo device forgot to make them stable to use.

So if you think you want to get a couple of these as digital signage players or as something that is at least marginally stable, think again.   There is a reason the surplus market is currently flooded with the things. they are unstable due to some kind of engineering flaw.   A lot of people tried hard in software to solve the issue but it seems that they just will not stay running and lock up randomly.