Intermediate Audio Podcasting setup with a way to avoid the disaster of losing a recording. 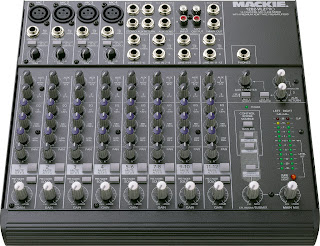 Last night everything came together and we recorded a fantastic episode of the DIY show for the AVNation pod-casting network.   And I'd love to share it with you,   but the "recording"  ate it's self as the imac I was recording on  decided to have it's hard drive eat it's self. right after recording was finished.  All that work, all the awesome conversation  with our great host, Matt Richardson was lost.

Could it have been avoided?   Actually Yes,   by wiring my mixer differently and using it to send to a separate record device.  The computer hard drive crash would have still lost the raw recording on the computer, but the backup on the second recorder would have saved the show and all of that incredible interview would have been out there for everyone to enjoy.

Right now I am using the mixer simply as a way to get professional microphones into the mac for use with skype.   I have a set of headphones I plug into the output and use Audio Hijack Pro to record the skype conversation.    This works well and is very simple when you do not have any failures.  so we need to add some wiring to allow the mixer to give us a way to send all the audio to an external recording system.   I have a Mackie 1202 mixer as seen in the photo.  I have 2 studio microphones plugged into input 1 and 2.  The 1202 has what is called "AUX send" channels,  it in fact has 4 of them, but we only need 2. So your mixer needs to have the ability to send or mix audio to a separate AUX bus.  Instead of sending the master out to the skype PC, I will instead send AUX1&2 send to the skype PC.   Then we run the audio out from the Skype PC to one of the stereo Line inputs.  Now here is where it get's tricky.  Each channel on the mixer has two knobs to control the level sent to each Aux Send.   all channels except for 1 and 2 need to be turned all the way down.  that way we do not get the audio from the computer being fed back into the computer causing an audio loop.    The only channels that are to be set to to to the AUX1 and AUX2 send bus  are the microphones for Skype to use.

Now use the mixer for the main bus to send your Stereo channel from the PC to the main mix, and send your audio from your microphones to the main mix as well.   Adjust the main mix volumes so that it sounds balanced and you are not louder than the skype audio. Now plug your headphones into the mixers headphone monitor out. This also gives you an advantage,  you now have your own voice in your headphones as an audio feedback and you will not have the tendency to talk louder like most people do when they can not hear themselves.  The other advantage this setup delivers is that you can now add a second or more microphones to the mixer and have guests in your local studio.  simply plug in a Y splitter to the headphone out and share audio with the local guests.

Last we need to take the record out of the mixer and connect it to another computer to do our backup recording, or other recorder.  I am actually going to do two.  First the mixer output will go into an audio DA and then into a Digital audio recorder, and then into a CD recorder.  a CD can hold 80 minutes of audio so that delivers a 20 minute buffer around a 60 minute podcast.    These CD recorders are dirt cheap now and can be found for around $100-$200 dollars.  It's nice to have a 3rd backup just in case everything goes completely sideways.

This is not the simplest setup, but it delivers you more features and some redundancy to your recordings so that you will not lose all your time and effort to a technical failure.  And honestly it is how you really should be running. I am still sick to my stomach that a technical failure lost a great recording and wasted the time of the guest and co hosts.
Email Post